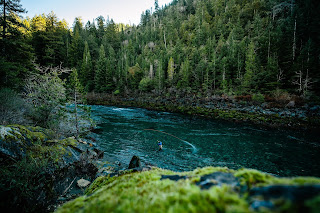 The Doing of the Thing...
Posted by Dax Messett at 2:27 PM No comments:

Yeah, there are a lot more spey people out there these days, and I am definitely one of them.  There are just a lot more steelheaders out there in general.  Each year, steelhead angling is getting more and more popular on our great western rivers that are still blessed to have a fishable run of wild steelhead.  From California to Alaska, wherever the few wild steelhead still swim, anglers are hot on their heels.  Based on all available data, the numbers of anglers are going up, while numbers of fish are going down.  The techniques used to catch them are getting more and more productive.  For those of us who love to pursue and encounter these magnificent fish, we all make our own decisions in regards to how we go about doing it.  Regardless of how one goes about angling for them, we all have an opportunity to help in the long term sustainability of the resource, which will ensure that future generations will have the opportunity to angle for these magnificent fish as well.  Among other things, we can write letters to fish and game commission members and politicians voicing our concerns, join and support likeminded organizations, and chose to fish in responsible ways, of which there are many.

I have been a fishing guide for 20 years now.  I feel extremely lucky and grateful to have had this opportunity to make a living in pursuit of steelhead.   I choose to just swing flies for wild steelhead with my clients.  Personally, aside from the artistic nature and beauty of casting a two handed rod, I liked standing in the river, swinging a fly, and attempting to catch my own fish, that fish, who has to aggressively move to take my fly.  I have caught steelhead in lots of other ways, but I want to catch the the most challenging way possible.  I like catching less of them, which sounds like a really dumb thing for a guide to claim, but...

After catching hundreds of steelhead on other methods, I was becoming more and more of a conservationist, taking a closer look into understanding my personal impact that I was having on the fisheries I was guiding on.  I wanted to focus more on protecting the resources that had been so good to me over the years.  Of all the reasons I started to just swing for wild steelhead, the most important one is because I want them to be around long after I’m gone.  As my good friend Brian Niska, manager of Skeena Spey Lodge in Terrace  puts it, "the best way to protect steelhead is to catch less of them".  Part of the whole Speytribe mantra is that we swing for steelhead because we catch less of them compared to all other methods.  That way, we can still fish for them, still have encounters them, and have less of a detrimental impact on the resource.  Catching less fish might not make sense to most people, but it should if we want to keep fishing for wild steelhead.

Most people out there would presume that you go steelhead fishing with the primary goal and mindset to actually catch a fish.  Fishing is a goal oriented undertaking, but the goals differ for each angler, and that’s ok.  I don’t care how anyone goes about trying to catch a fish, so long as they are understand their personal impact on the resource, are fishing within the regulations (some of which need to change), respect other anglers, and most importantly…respect the fish.

What if you just want to catch and release a bunch of fish, because you are a "numbers" driven angler?  Overall, less than 10 percent of wild steelhead runs remain in a existence, and that number is declining on most PNW steelhead fisheries.  Considering the mortality rates of a caught and released steelhead (10% to 20%), if everyone focused on a numbers oriented angling experience, we would all lose the opportunity to even try to catch one.  At best, we will end up with more river closures.  At worst, playing the numbers game is just another contributing factor to wiping an entire run of a magnificent species off the face of the Earth.  Steelhead have a lot of problems, and there are many other factors that contribute to the declining numbers of wild steelhead other than how we fish for them…but that is a whole other story.  It is easy to blame other factors, but we all really need to look in the mirror at how we personally impact the resource.  How many a day do you need to make you happy?  One?  Seven?  Three?  Thirteen?  None?  Ask some old timers from the Eel River system or Puget Sound how many they needed 40 years ago, and how many they need now.  Most people would just like to have the opportunity to just go out and try to catch one.

I'm not saying to not go out and rack up your numbers doing 18 mile floats chucking bobbers and beads on fly rods, if that is your thing.  But at the end of the day, each and every one of us intentionally, and individually chose our own method of angling for steelhead.  Your guide doesn't, the guy who's boat you are going out in doesn't, you do.  We each get to chose how many we need to catch to be happy with the experience.  We each get to chose if we need to lift the 6th fish of the day out of the water for another grip and grin photo.  We get to choose if we race other anglers down river, or lock up gigantic pieces of water, throw into someone else's water, walk in below somebody, or kill a wild fish.  We each get to choose how much we personally impact the future of steelhead by how many we need to encounter to be happy, regardless of technique.  Every time a steelhead is hooked the mortality rate increases, regardless of method.  The good news is that the Moments not numbers mantra works for everyone.  I could care less how you fish for them, just understand your personal impact on the resource, and above all respect it. Posted by Dax Messett at 2:26 PM No comments: